The shutdown of Greek schools due to Covid-19 pandemic in the spring of 2020, gave our laboratory the opportunity to introduce Copernicus to all school teachers and students across Greece through the daily TV program “learn at home” implemented by the Greek Ministry of Education in collaboration with the Greek state TV broadcaster ERT (https://www.euronews.com/2020/03/31/greece-uses-state-tv-to-teach-school-children-during-coronavirus-lockdown)

The TV programme was a great success, as it was viewed daily on average by more than 100,000 children aged 4-14.  The same programme was broadcasted again by the Greek state TV (ERT) during the second lockdown in the winter of 2020.

Yota Assimakopoulou, an associate of  our laboratory and a primary school teacher,  was picked by the Greek Ministry of Education to produce and deliver TV lessons for the subject of  primary school Geography /Geology.  These lessons gave us the opportunity to present for the first time on public television, ways to integrate and utilize Copernicus satellite imagery and tools like Sentinel Playground in the primary school curriculum.  In these lessons, educational material from ESA and specifically from the “Teach with Space” education program was also integrated.

The prime Minister of Greece and the Minister of Education stressed the value of these TV lessons during the COVID-19 lockdown and for the future, in a Skype meeting with all the teachers who implemented the program voluntarily. https://www.iefimerida.gr/politiki/kyriakos-misotakis-ekpaideytikoi-ekpaideytiki-tileorasi
The relevant lessons of the “learn at home” program are available for future distance learning as well as classroom-based learning on the website of the Greek Educational Television, the ERT WebTV as well as at the following links:

On the weekend of September 21 & 22, 2019, LACAE, participated in the science festival for kids “P100 – Planet Technopolis” of the Municipality of Athens that managed to land over 6000 children and parents on …. another planet

During our workshop “Teach with Satellites”, children and parents had the opportunity to learn how Copernicus satellites, monitor earth from space and help us deal with forest fires, floods and other natural disasters. Specifically, we implemented a series of educational activities among which the “MaFiS” hands-on educational activity  for mapping of burned areas, which was developed in the framework of the doctoral dissertation of our associate Yota Assimakopoulou.

We thank the participating children and their parents for the success of the workshop and their encouraging comments !! 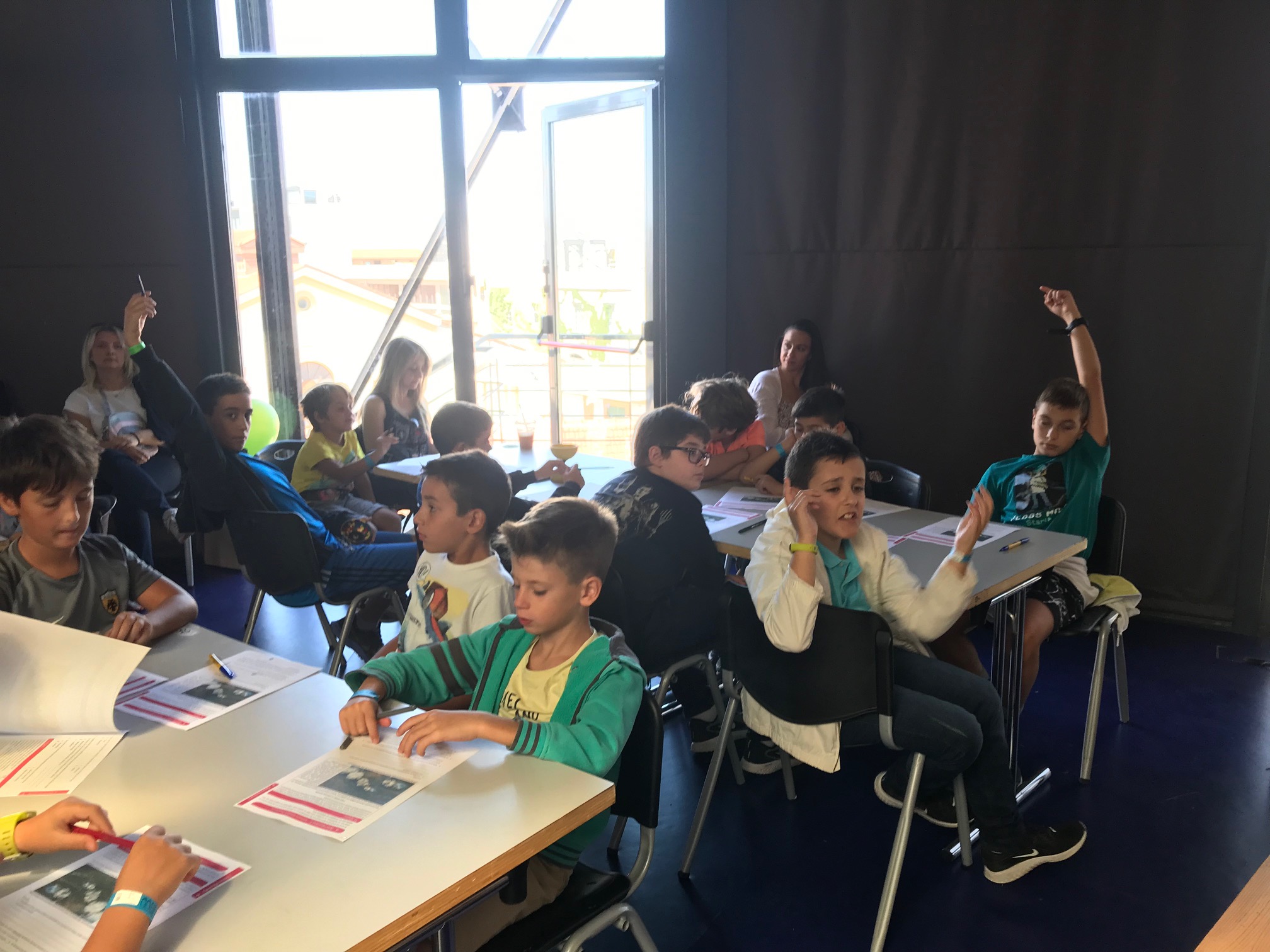 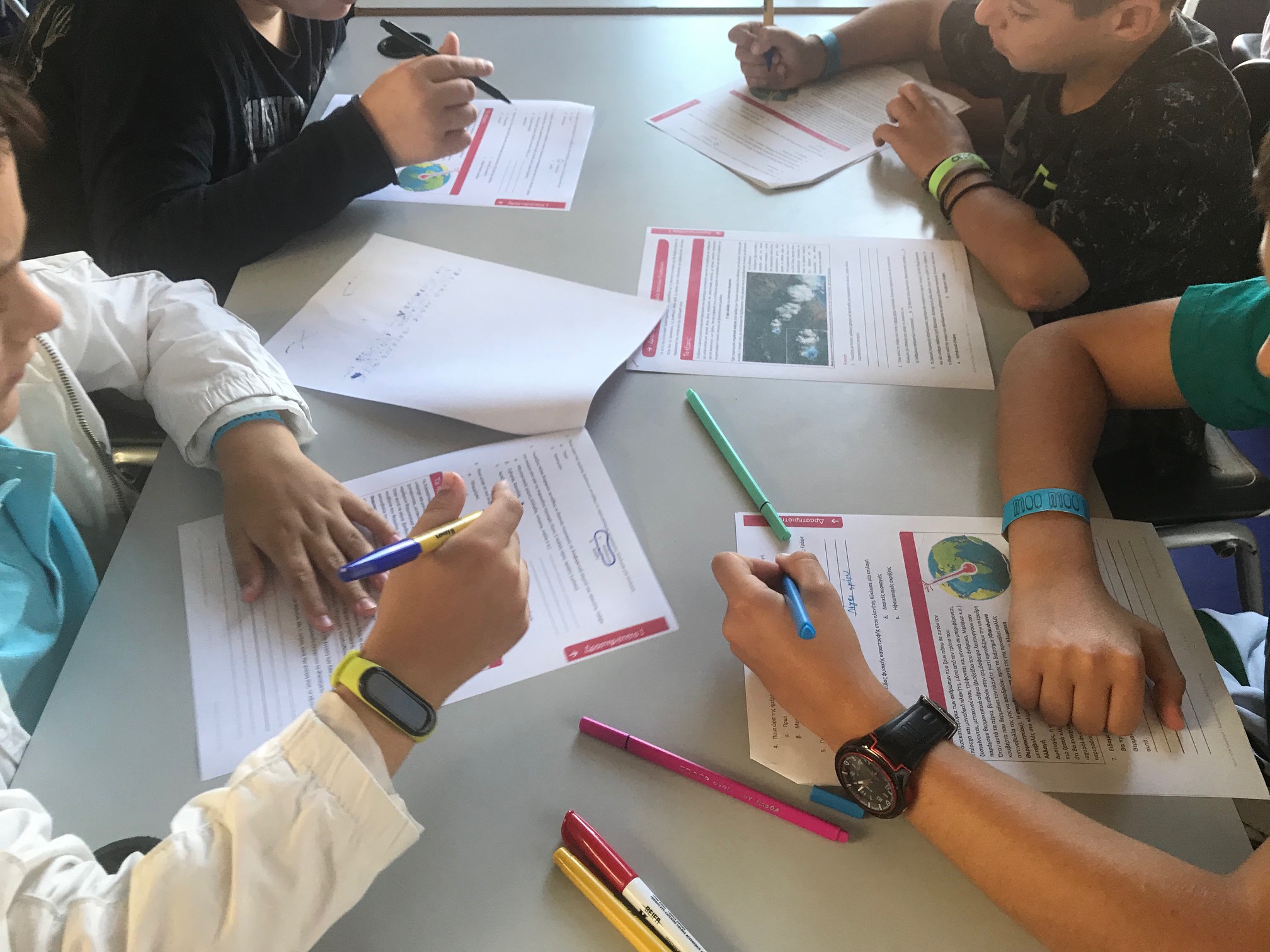 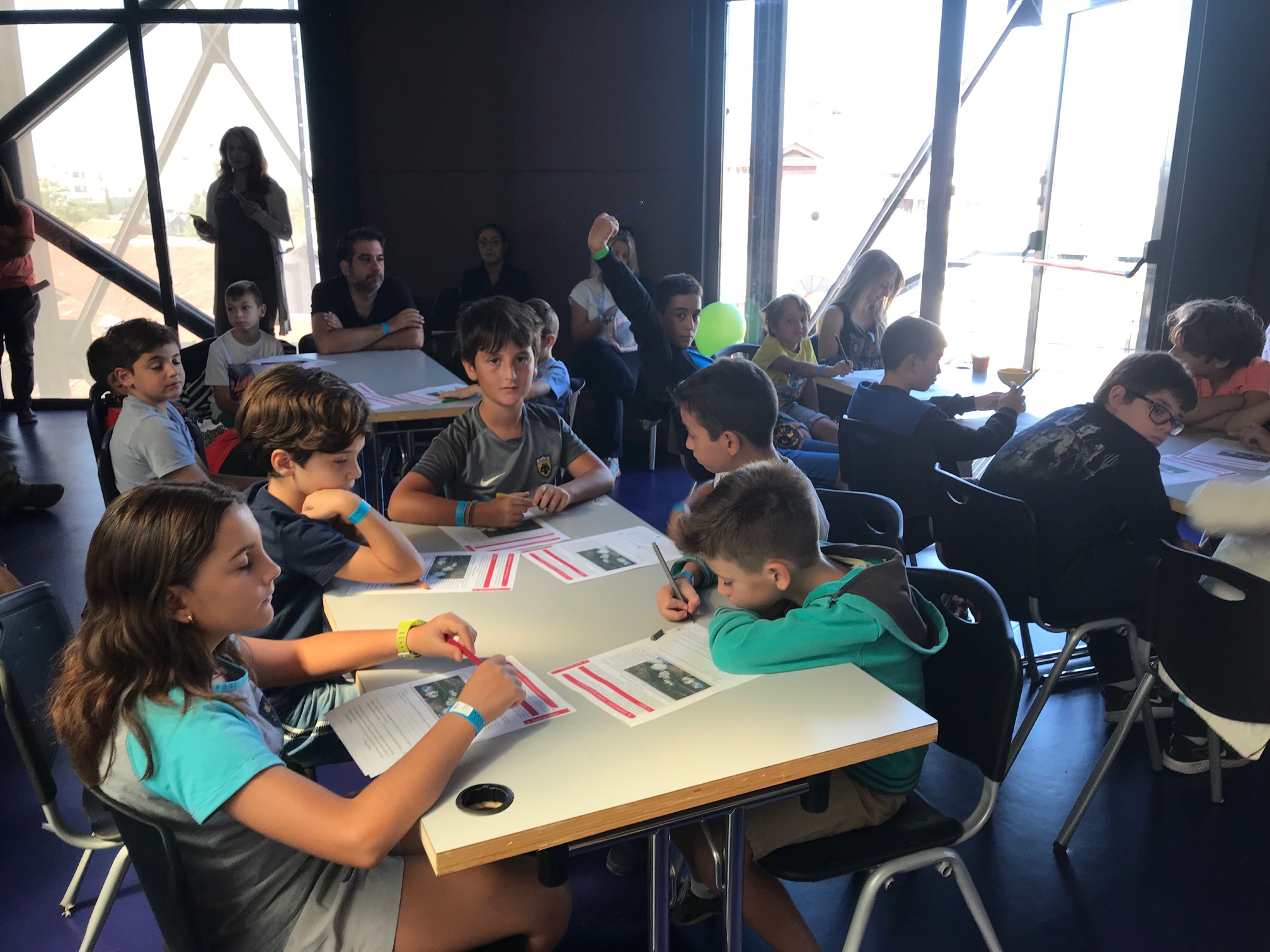 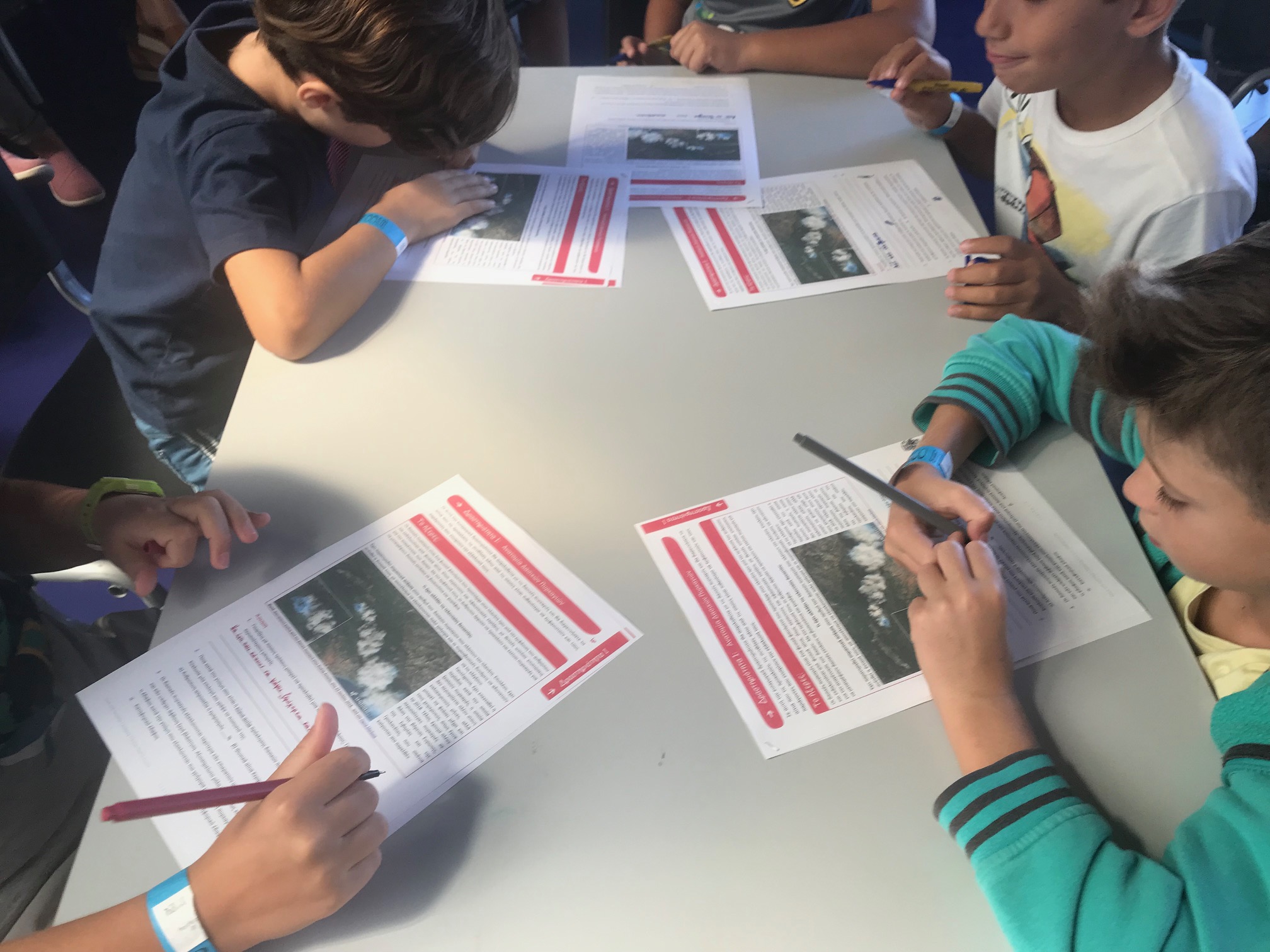 The National and Kapodistrian University of Athens, in the framework of its successful “Open Gates Day” programme, opened its gates once again this year to high school students, giving them the opportunity to visit the university premises, meet the scientists and learn about the research activities of each department.

LACAE, having embraced this initiative from the very beginning, engaged visiting students with its latest educational activities, which utilize Satellite Remote sensing data and tools in the study of  natural disasters and climate change.

We thank the students and accompanying teachers for their enthusiastic participation. 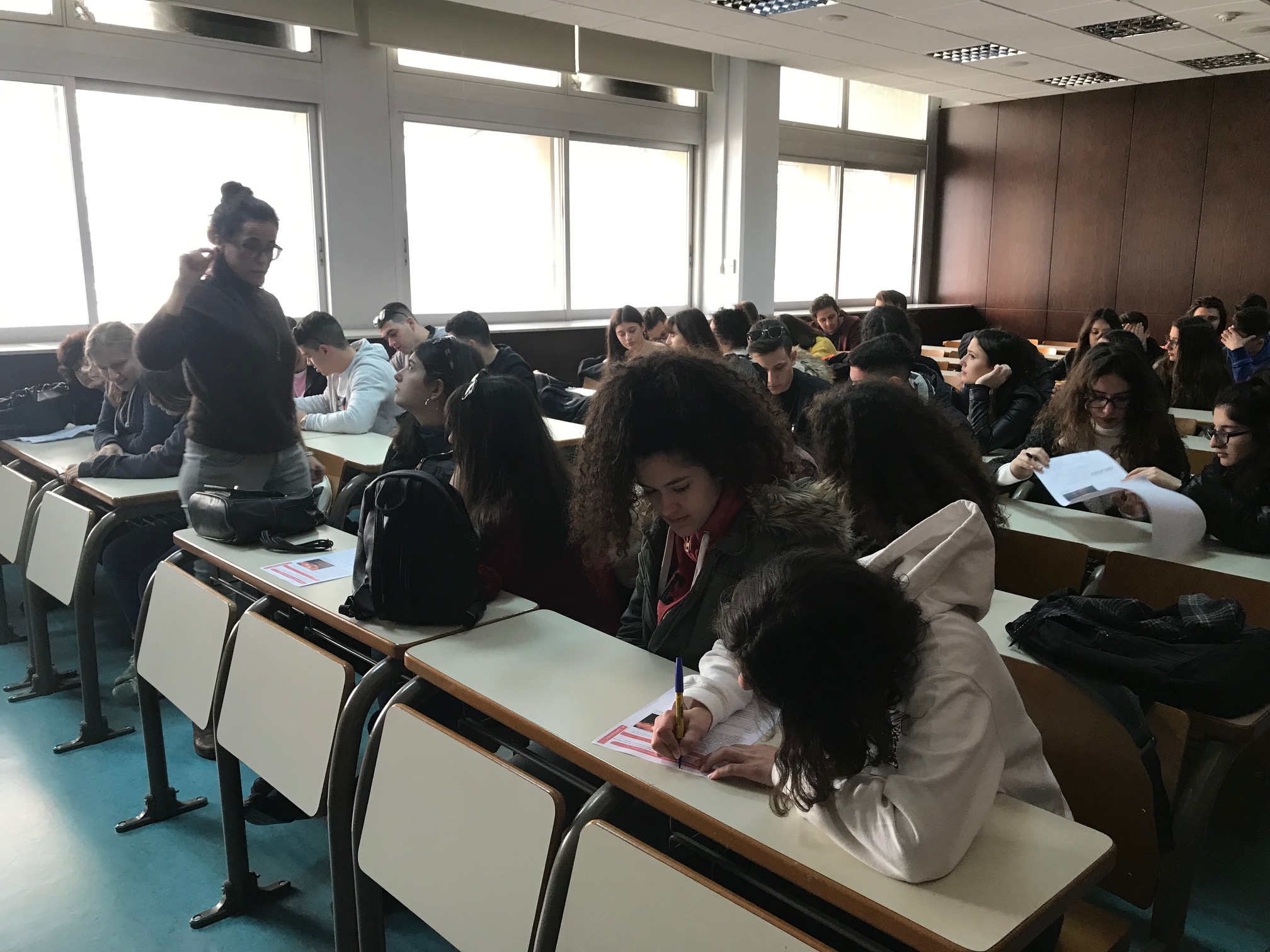 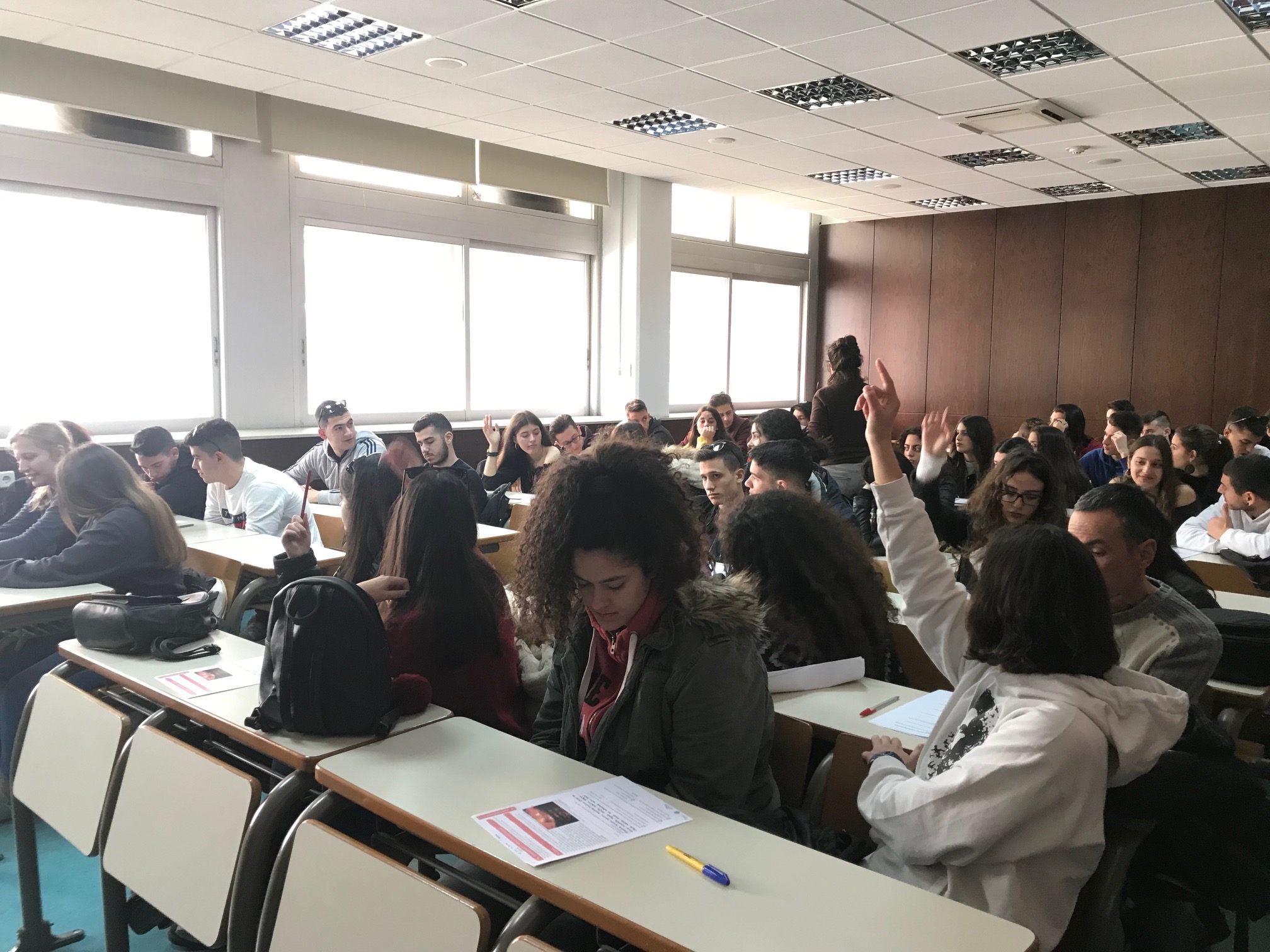 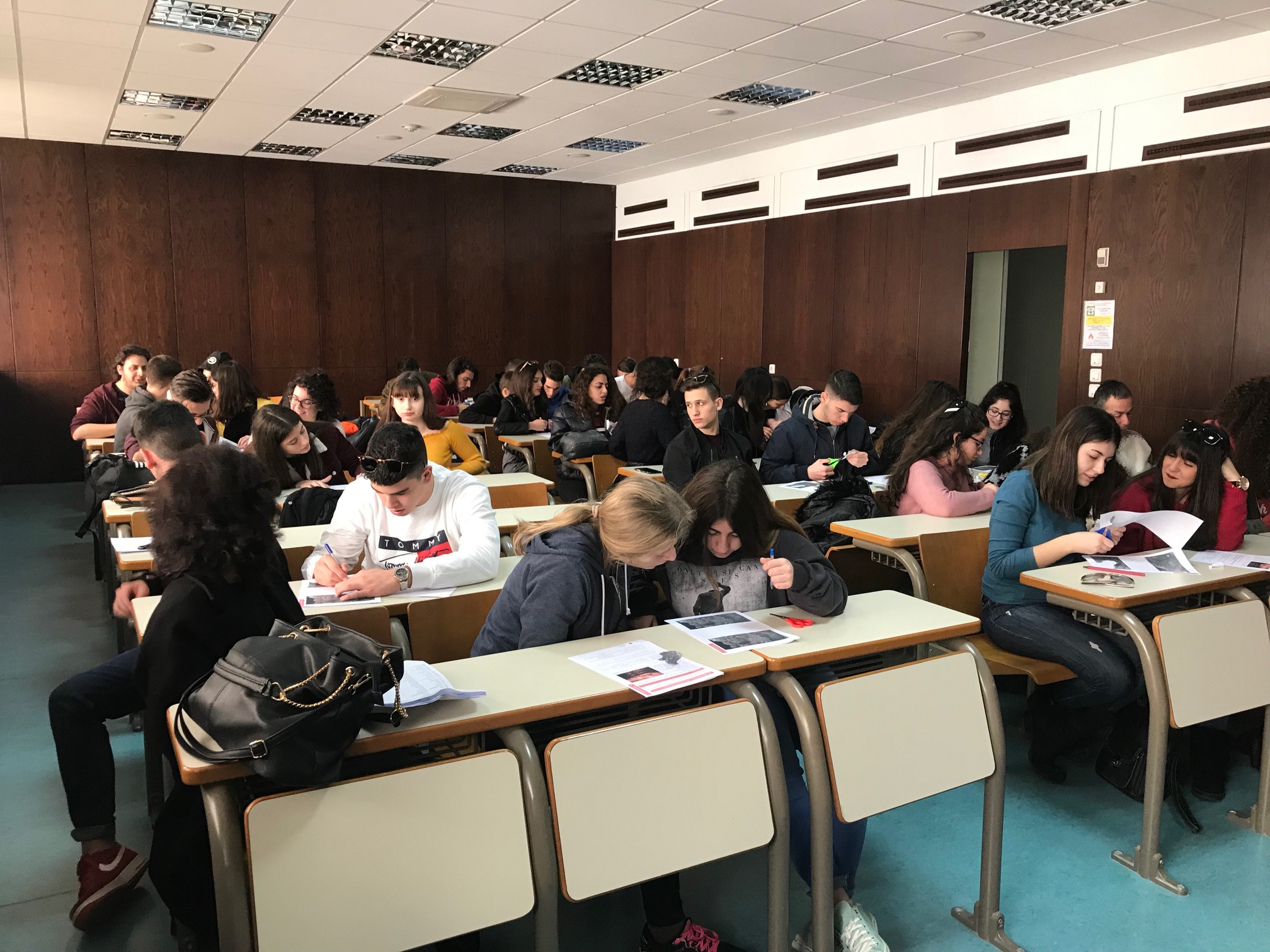 LACAE had the pleasure to travel to the remote island of Kythira on 18-20 December 2017 and participate in the science festival dedicated to space & astronomy, organized by the National Observatory of Athens and the Municipality of Kythira.

During this three-day event, the students of Kythera high school and lyceum had the opportunity to learn about the world of artificial satellites and get introduced to the recent advancements in Earth Observation.

The educational program excited both students and teachers based on the feedback we received. Requests were made for more similar events and for the development of related educational material in the Greek language. At the end, the local radio station “Tsirigo FM” invited us for more science talks.

We thank all the Kytherians for the huge interest! 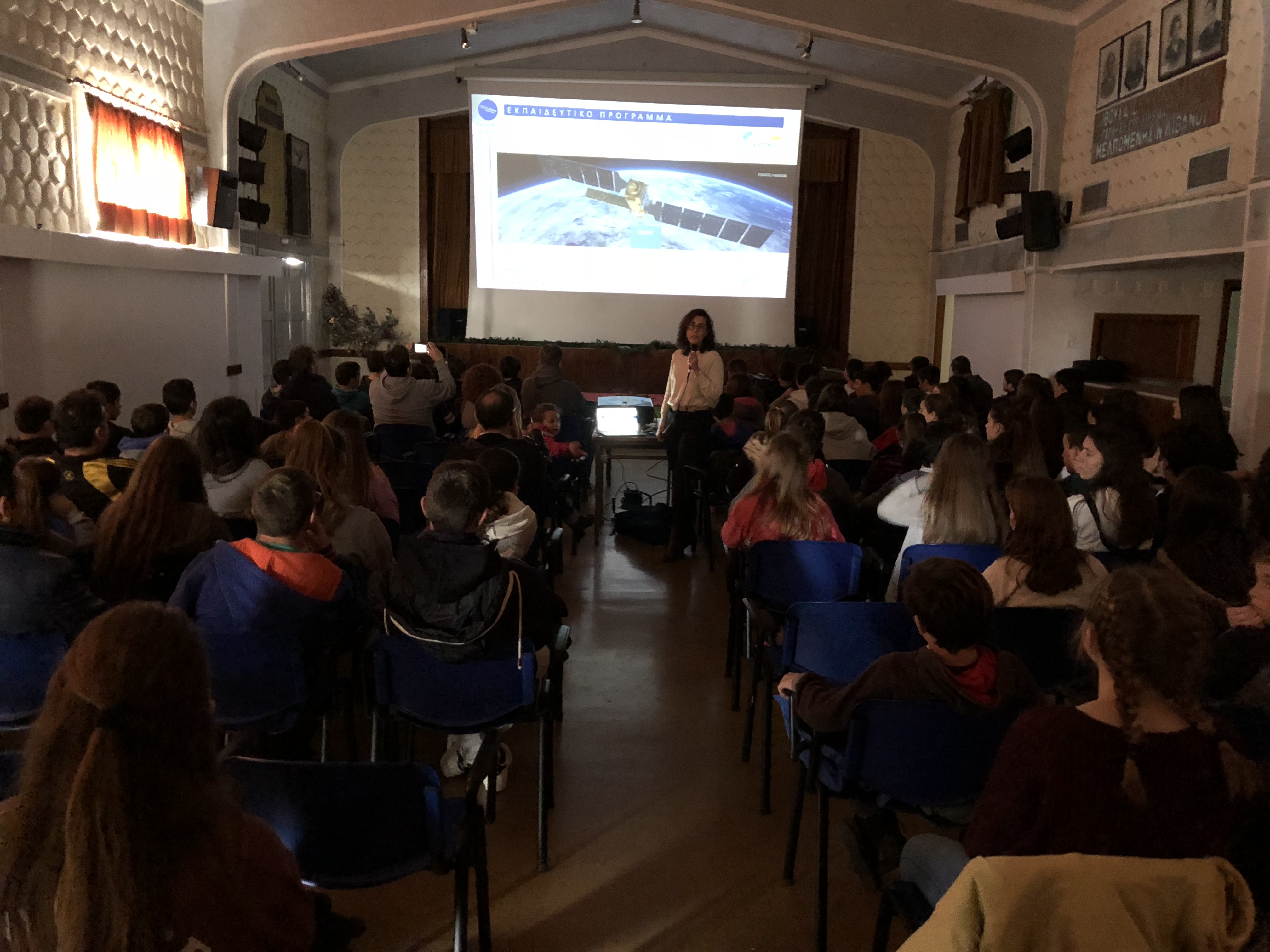 Once again this year, on Friday the 29th of September, we’re renewing our appointment with European Researchers’ Night, the annual mega event which celebrates science and research and takes place simultaneously in several hundred cities across Europe and beyond.

This year however, LACAE as one of the founding members of Copernicus Academy network and the CAN-HelP consortium, it will introduce to the public the Copernicus programme.

Copernicus is a European Union Programme aimed at developing European information services based on satellite Earth Observation and in situ (non-space) data, in order to help service providers, public authorities and other international organisations improve the quality of life for the citizens.

Visitors will have the opportunity to learn about the Sentinels satellites and what they have to offer but also learn how the Copernicus program has helped the Greek authorities with its services and data, in the recent devastating fires of Attica, Kythira and Zakynthos, as well as the lethal earthquake of Chios.

Don’t miss the opportunity to meet Europe’s eyes on earth! 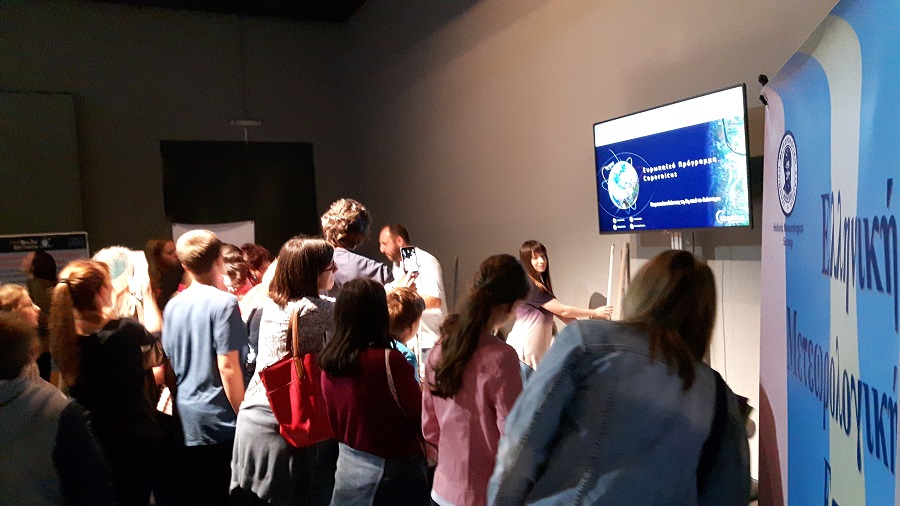 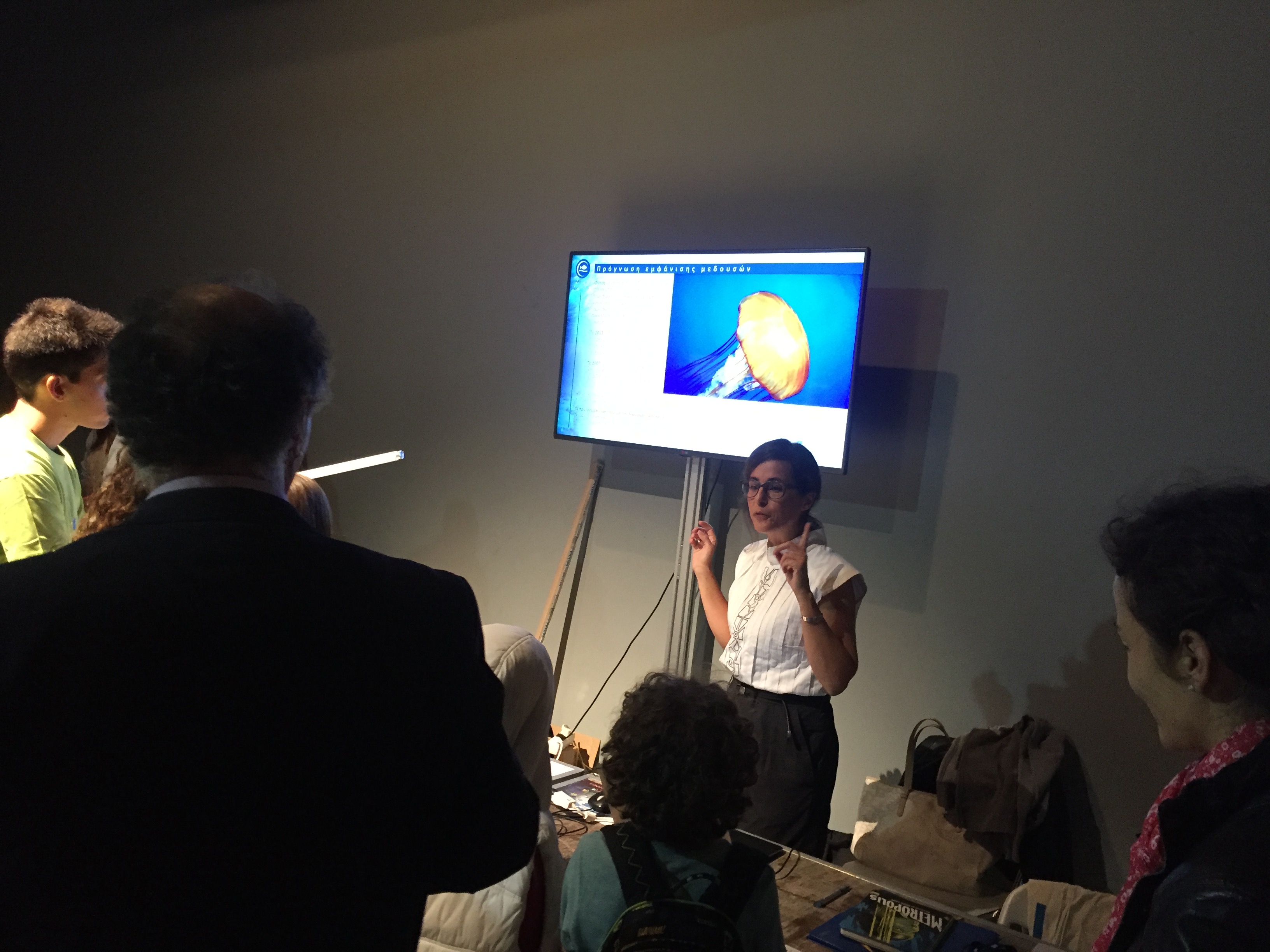 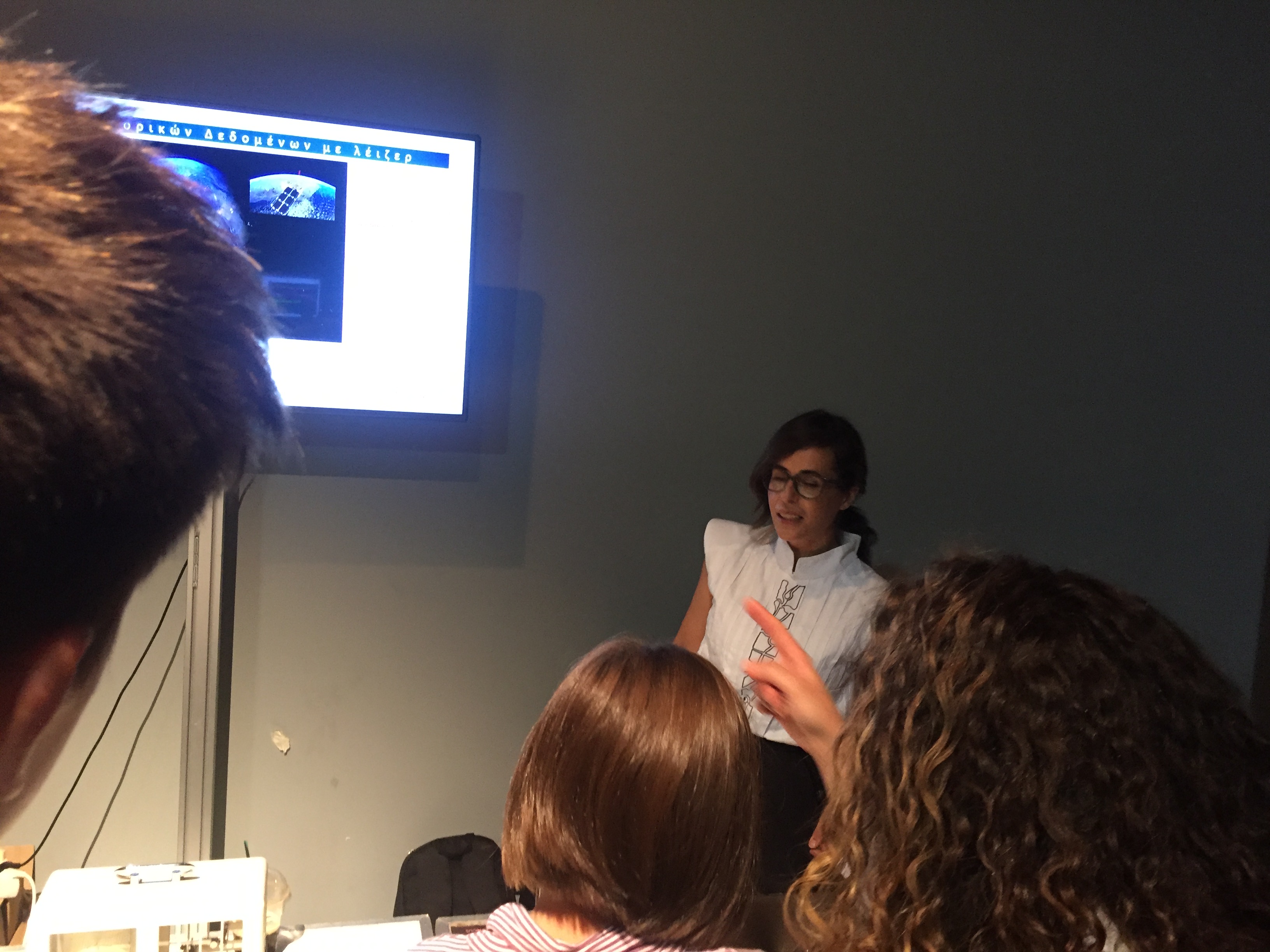 Saint Nicholas (Agios Nikolaos) is a beautiful sea side town, on the northeast coast of Crete, with a a population of 10,000. Two primary schools of this lovely town were selected for evaluating, in classroom conditions, the new, original, EO educational programme of LACAE.

This programme aims to educate students and teachers alike on the subject of Earth Observation through satellite remote sensing and introduce the European Commission’s Copernicus EO programme. It includes presentations, attractive videos and simulations, interactive knowledge games and satellite images of extreme events over Greece. The material was carefully prepared and  presented in a popularized manner tailored to the students’ needs and interests, by the laboratory associates Yota Assimakopoulou and Francis Sofiou, under the scientific supervision of prof. Panagiotis Nastos.

The educational programme was a great success and both students and teachers showed great thirst and  enthusiasm for the subject.  We collected valuable feedback and we intent to optimize our educational material and methods based on the constructive comments we collected.

We would like to thank the principals of the 1st and 2nd primary schools of  Agios Nikolaos (Ms Klontza Evgenia and Ms Kafetzaki Kalliope) and Mrs Kokkinis who is responsible for all educational matters in the municipality of  Agios Nikolaos. Finally we would like to thank the Fifth and Sixth grade students of both primary schools for the enthusiasm they showed during this programme. 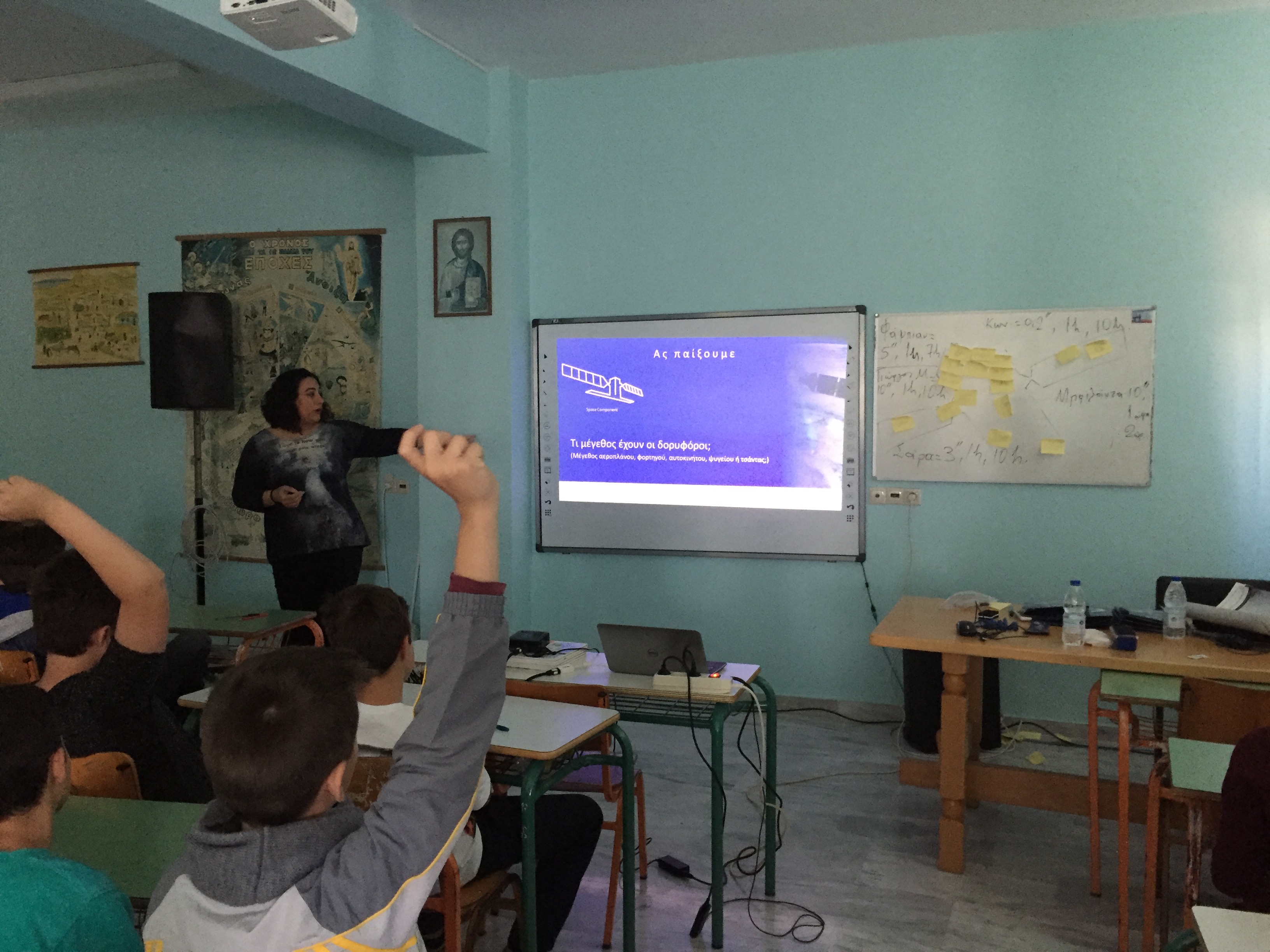 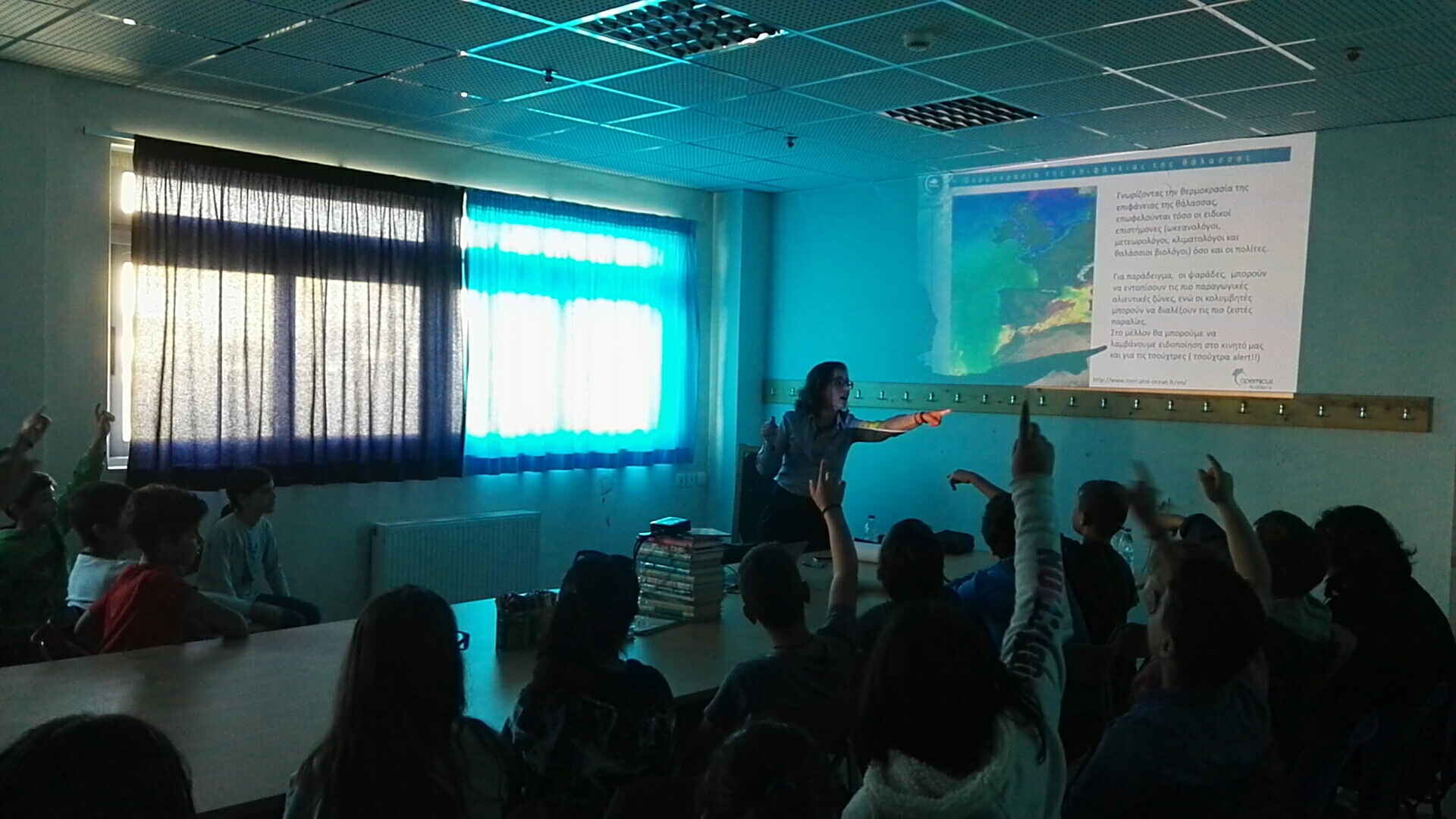 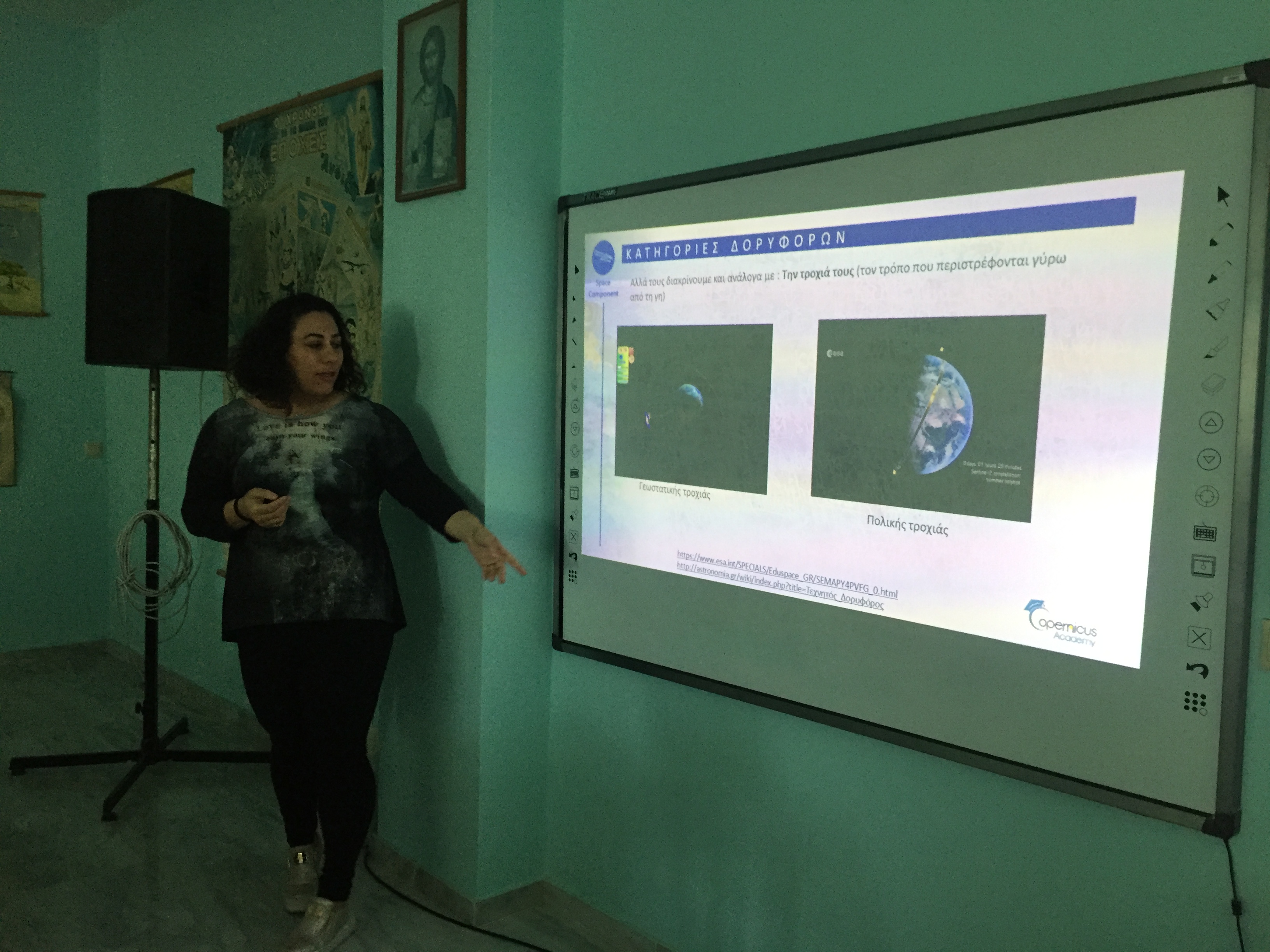 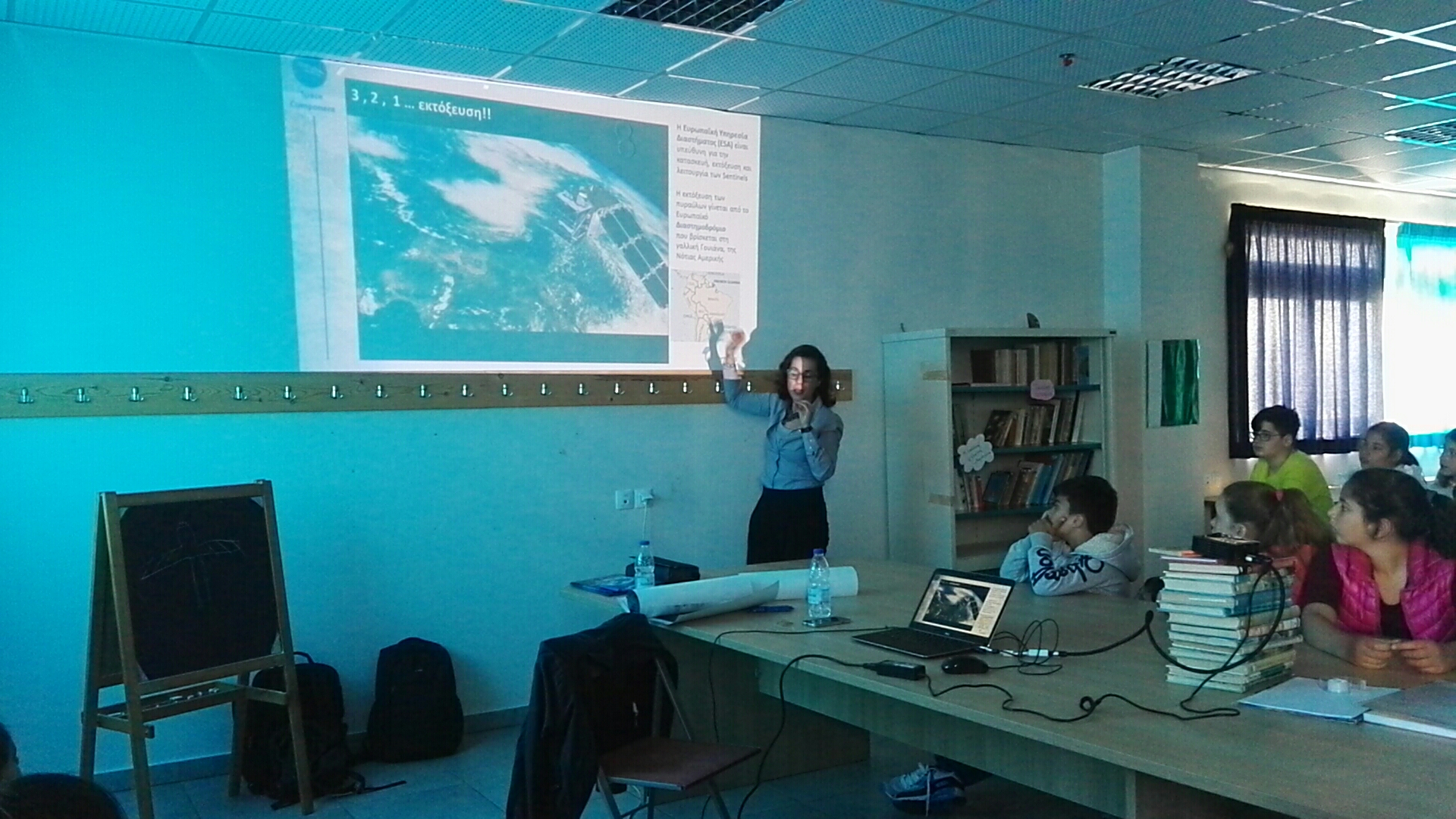 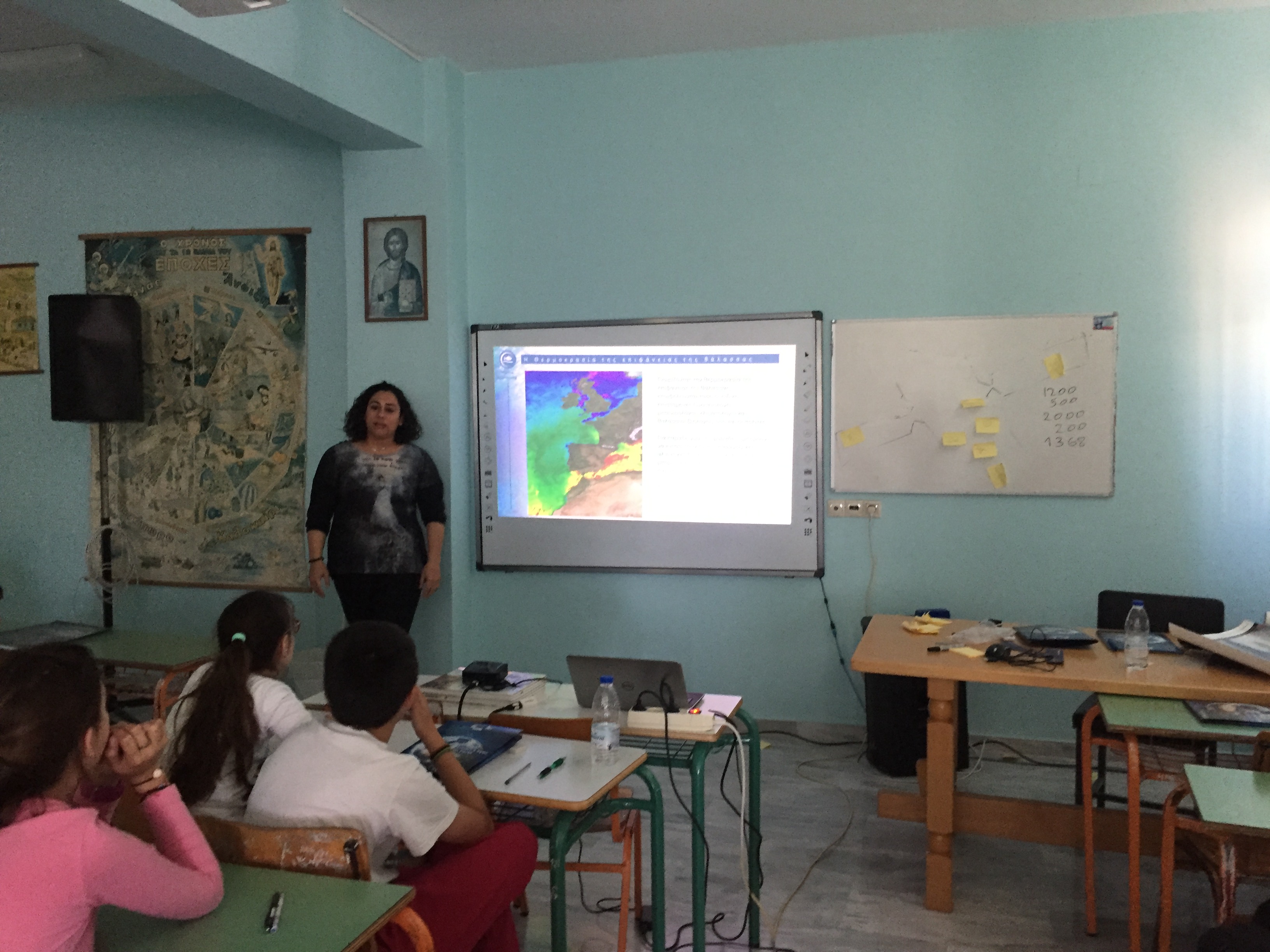 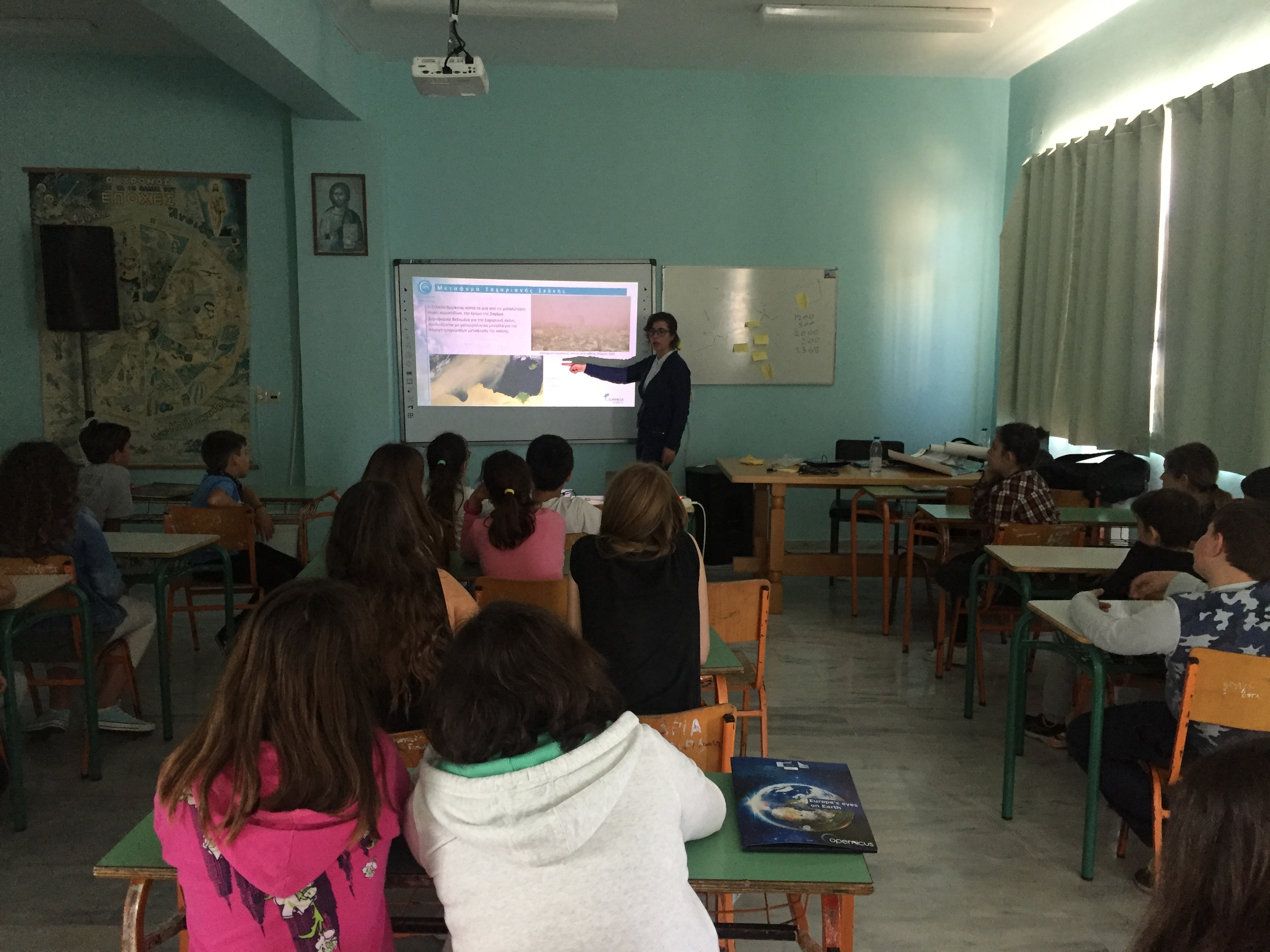 The recently established network of  Copernicus Academy, is a new European Commission initiative, which aims to attract new users for the satellite data and earth observation services of the  Copernicus  programme. Through the creation of this pan-European education and public dissemination structure, members of the network, aim to promote the transfer of knowledge and the development of relevant skills in the population.

In order to better serve this objective, the Copernicus programme was translated, popularized and presented to the public at the Athens Science Festival 2017.  The presentation was accompanied by a public oriented, interactive educational knowledge game  for satellites and remote sensing. Finally, Copernicus promotional material was shared.

Athens Science festival 2017,  was an extremely successful event,  which attracted nearly 30.000 visitors. The Copernicus related activities received great response and were embraced by the festival visitors.

The interest of visitors for the Copernicus programme, delighted  our scientific associates that promise to come back with even more exciting stuff.

LACAE’s scientific associates responsible for this action are  Yota Asimakopoulou MSc  and Frances Sofiou MSc  who worked under the supervision of Professor Panagiotis T. Nastos,  director of the laboratory . 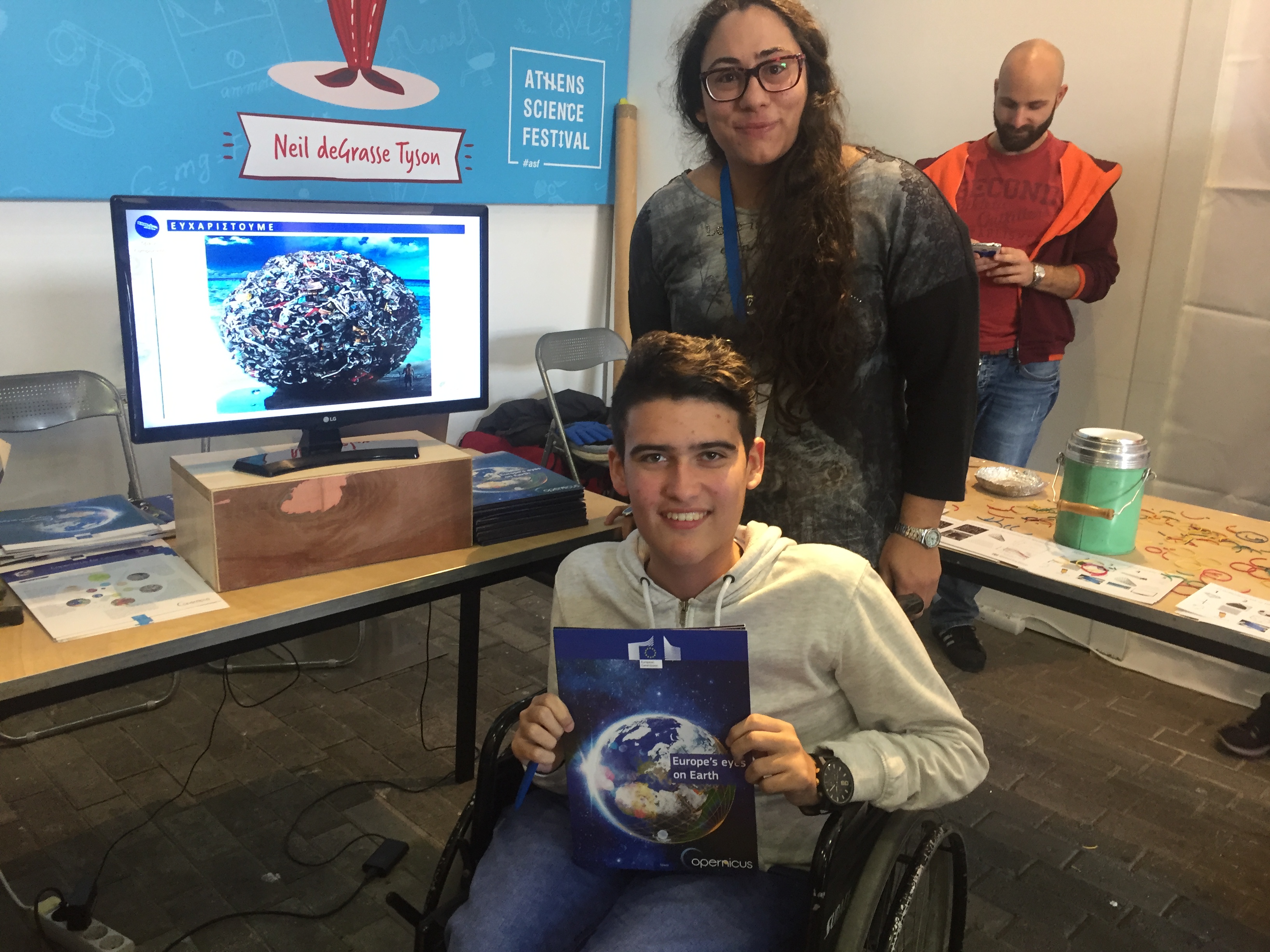 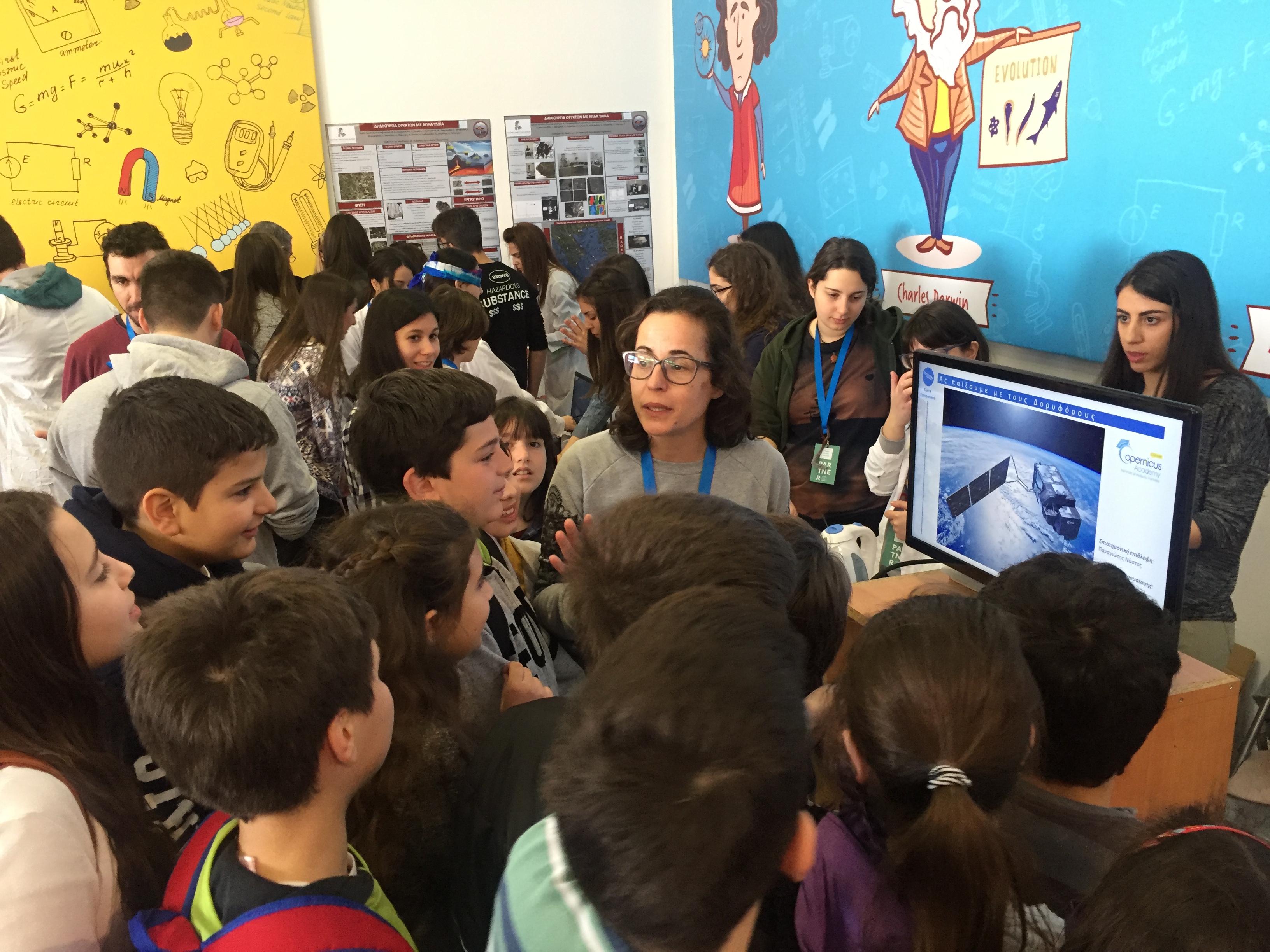 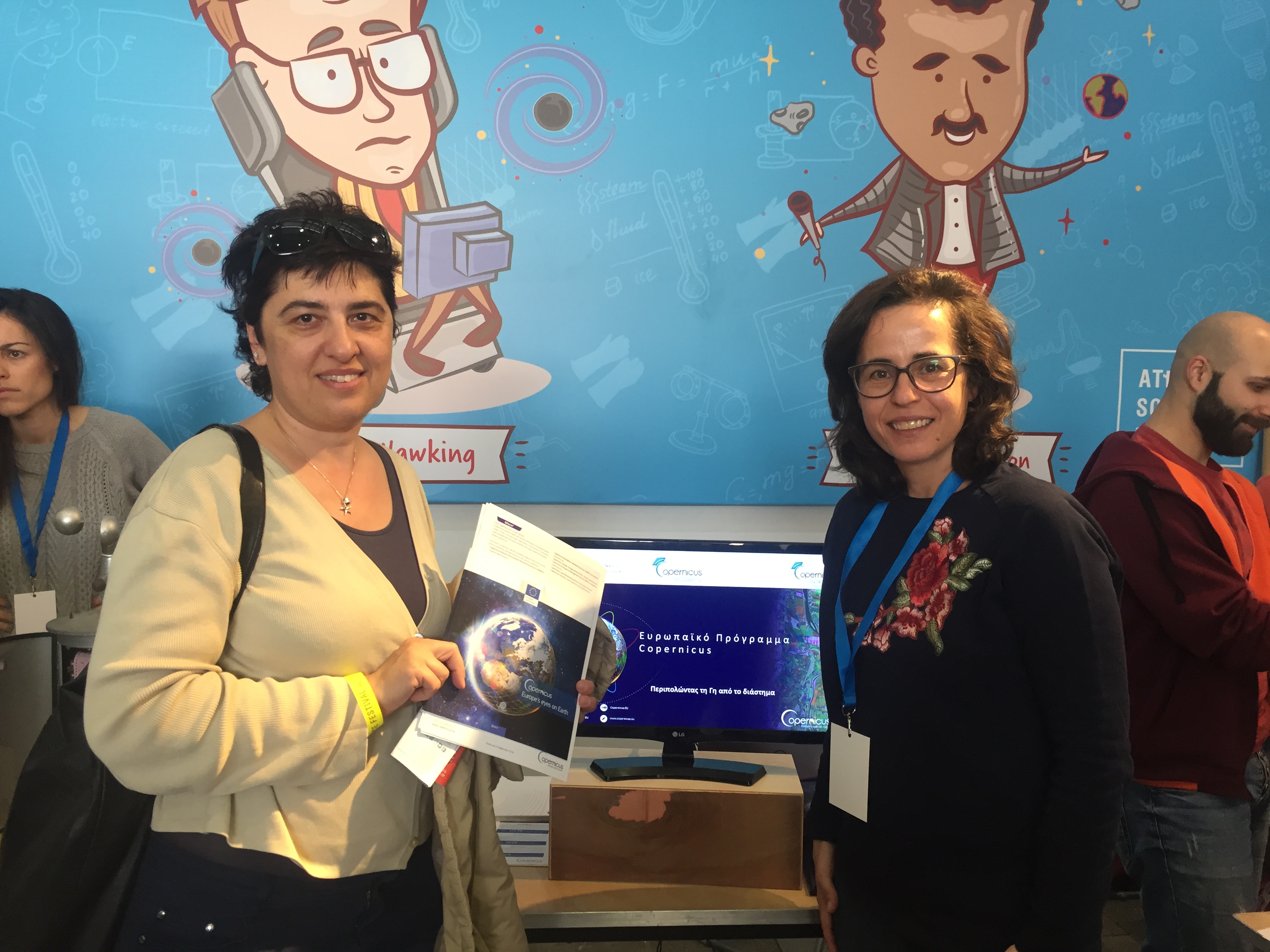 For the 4th consecutive year, the Athens Science Festival 2017 ,  took place between 29 March and 2 April, in Technopolis of the Municipality of Athens, under the theme “Shaping our future”.

Visitors had the opportunity to choose among dozens of events which aimed to disseminate scientific knowledge and technological innovation to the general public, urging people to take science into their own hands and become part of future developments.

The participation of LACAE, for the 3rd consecutive year, received great response and was embraced by the festival visitors.

The laboratory’s  scientific associates demonstrated exciting experiments, scientific presentations and interactive educational games, which were greatly appreciated by the public!

We  would like thank the festival’s visitors for their interest and especially thank the laboratory’s  scientific associates who supported this action with great passion and enthusiasm . 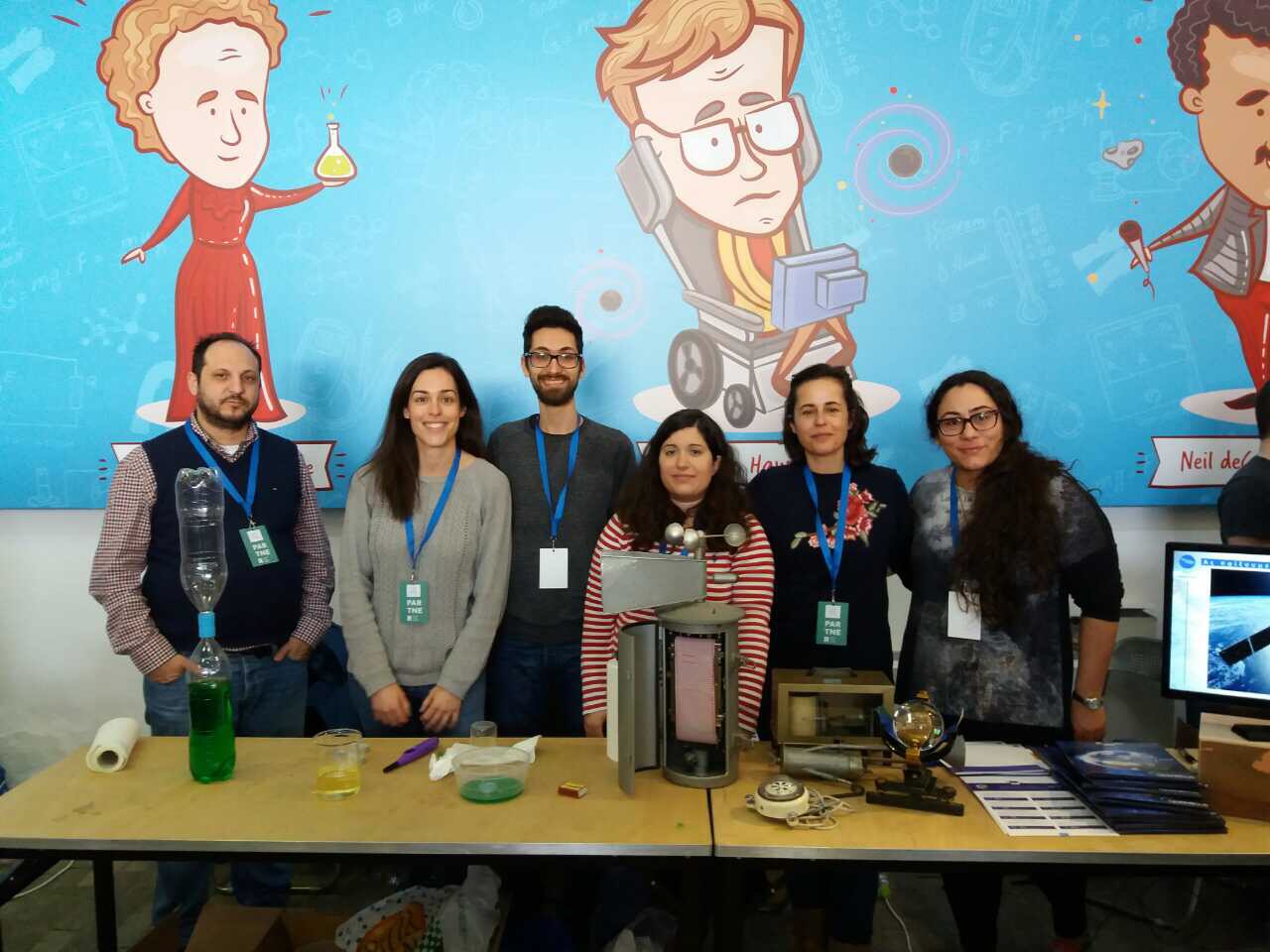 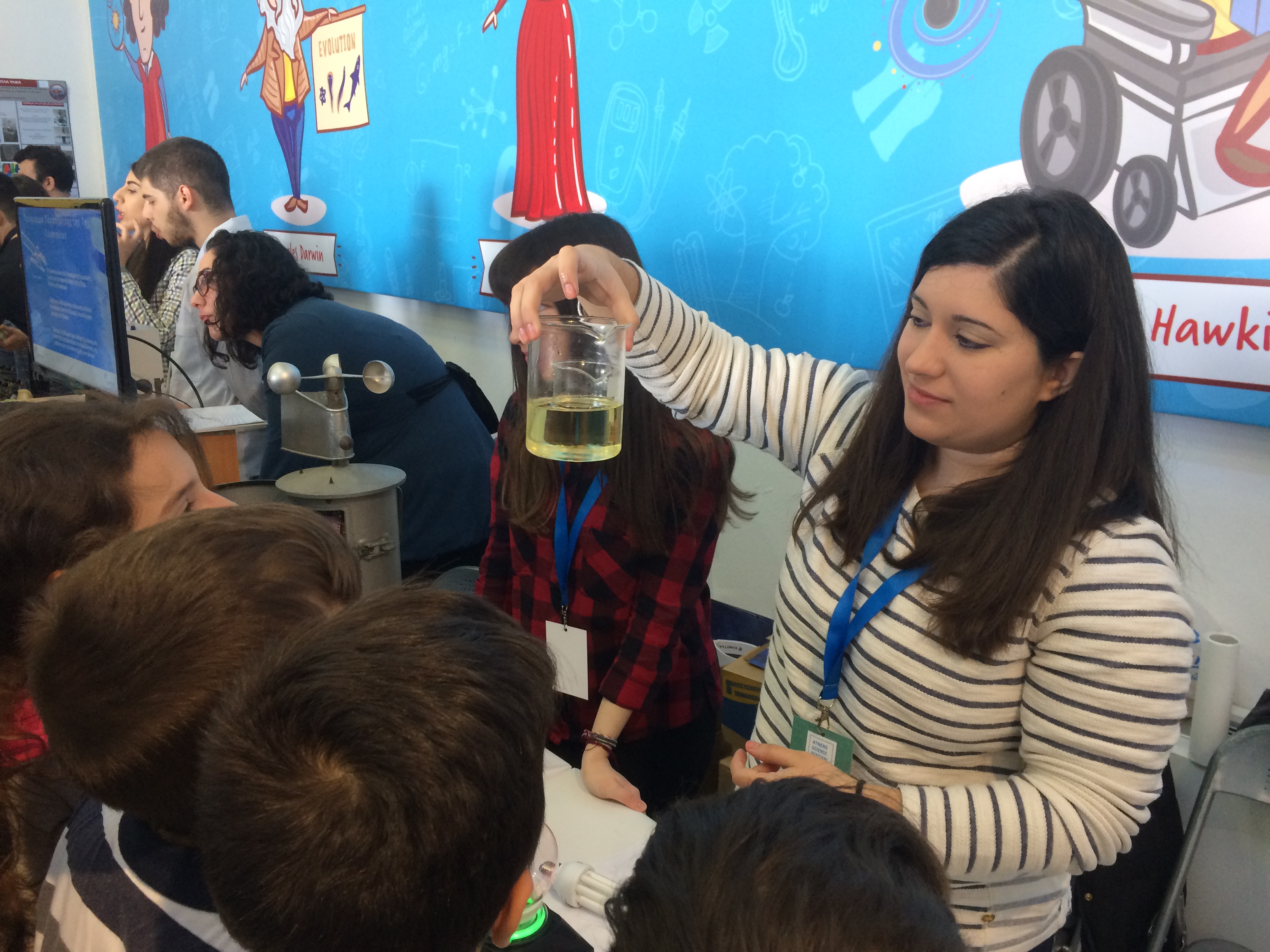 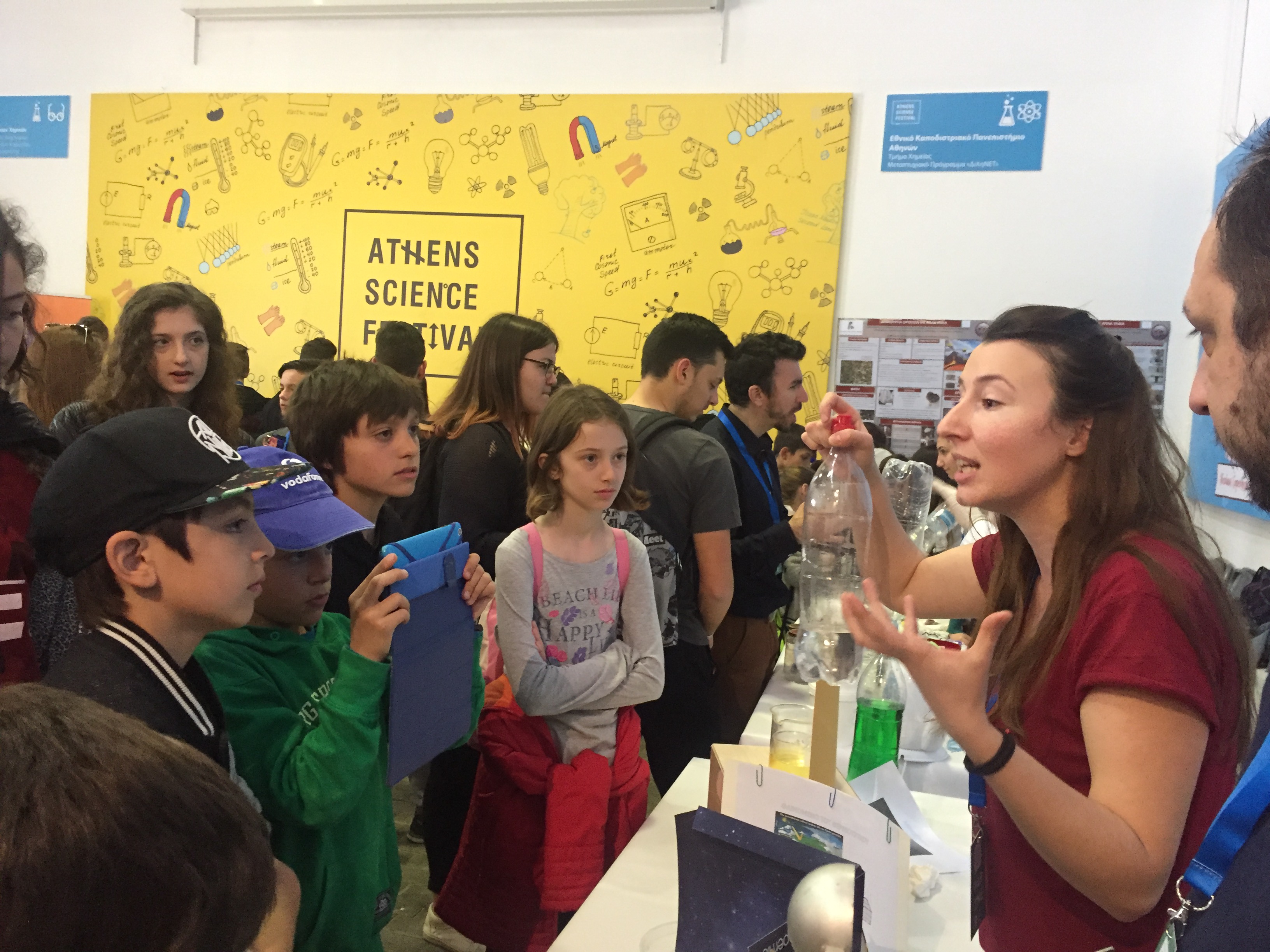 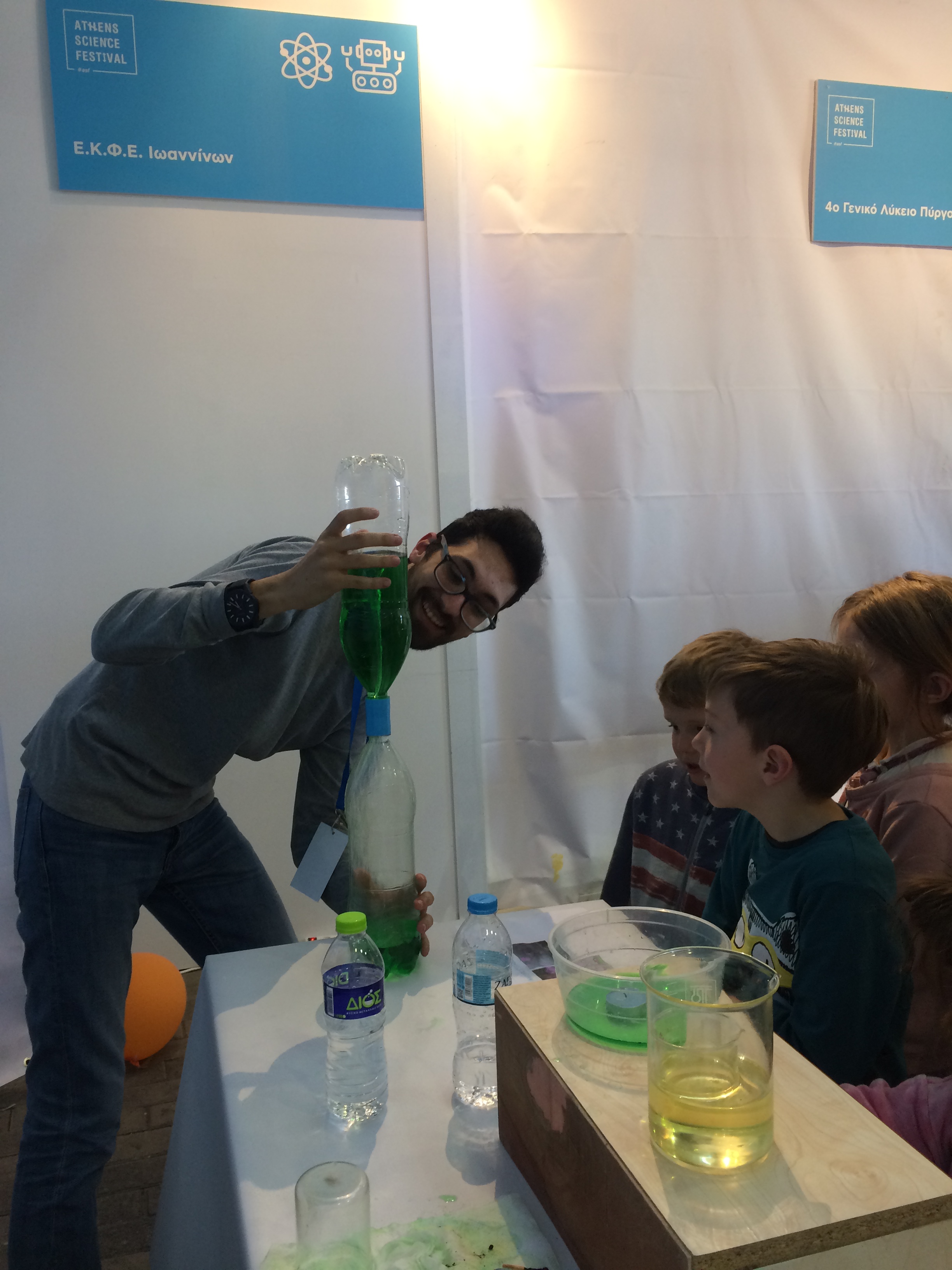 Did you come across a tornado? Report it